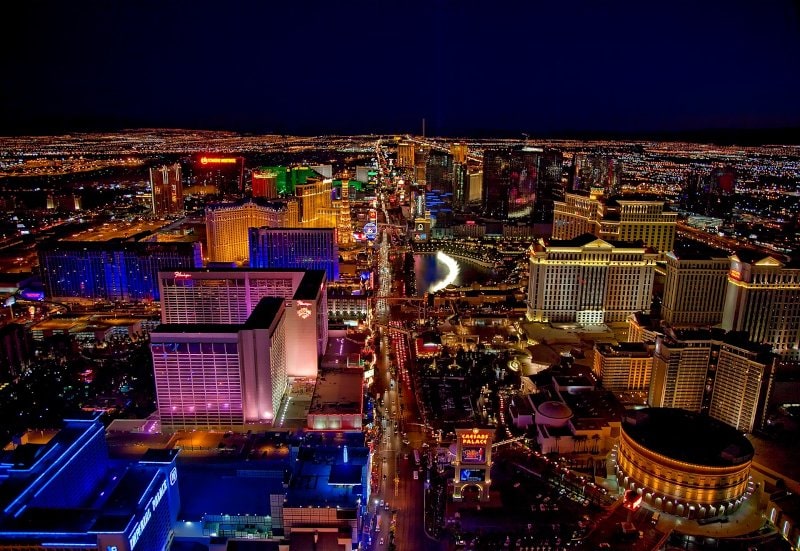 Did you know that Las Vegas is the brightest city in the world? The numerous hotels in Las Vegas and in particular those located on the "strip" are symbolic for the city for their beauty, size but above all for the sparkling lights they produce.

A study has calculated that 15,000 Km of neon lights are needed to illuminate the city of sin, and if not enough to understand how bright it can be, just think that Las vegas is also visible from space.

In addition to the lights that illuminate the city to highlight the uniqueness of the place, we must not forget the lights present inside the hotels used as casinos, in fact, to ensure that the tourist remains struggling with slots and tables games for as long as possible, it has been well thought out to make their interiors perpetually illuminated to prevent the perception of day and night.

This trick, in addition to increasing the presence of players in terms of number and time spent, makes the city of Las Vegas the brightest city in the world even within its own structures.

The energy needs of a particular city as Las Vegas have been satisfied for years by the construction of the Hoover dam, an imposing dam just outside the city which, in addition to providing water, was able to power the lights of the Nevada's metropolis.

In recent years, however, the exponential demographic growth of Las Vegas and the construction of larger and more enlightened hotels, made it essential to start a far-sighted deal for the use of renewables energy sources to feed the energy needs of the city.

This ambitious project implemented by the municipal administration in 2008 aims to make Las Vegas completely autonomous by 2035 by making use of the exclusive use of renewable sources.

At the moment the deal has managed to make Las Vegas the largest American city to power its municipal facilities entirely from renewable sources thanks to the construction of a mega photovoltaic system located in the nearby desert of Mojave where the sun is certainly not lacking.

Las Vegas, defined by local administrators as the entertainment capital of the world , is known as the home of gambling and whatever kind of perdition a tourist might seek.

A reputation that has deservedly earned since the 1930s when gambling was legalized and thus began to expand with the construction of many hotels and casinos, thus transforming a small oasis into Nevada desert in one of the main attractions for tourists from all over the world.

While in the city an average of 420 unions are celebrated a day, at the same time a large group of betrothed celebrate their stag or hen parties taking advantage of the unwritten rule that applies in the city which predicts that "what happens in Vegas stays in Vegas". 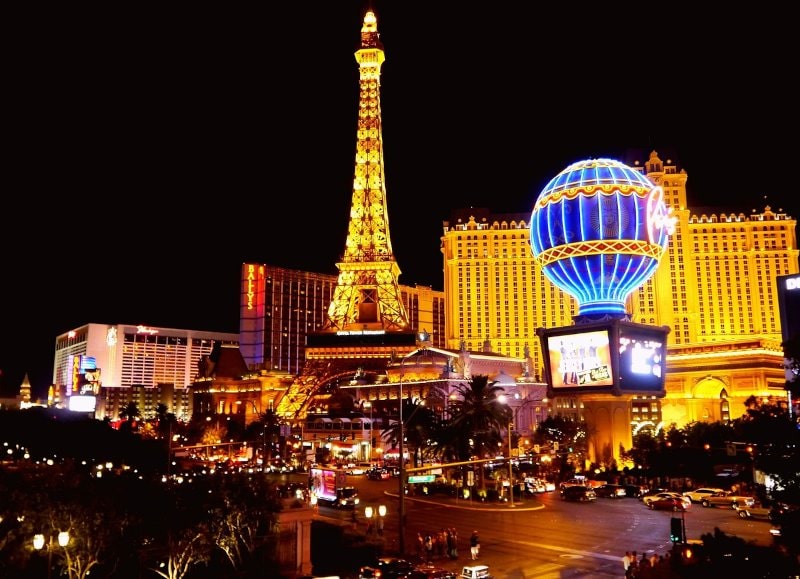 The famous hotels present in Las Vegas are often reproductions of other iconic world attractions such as the Venetian where it appears to be right in Piazza San Marco in Venice, or the Luxor which immerses the tourist in the atmosphere of ancient Egypt.

Other famous hotels are the Bellagio with its mega fountain that entertains visitors with spectacular water games, or the Stratosphere towering over Las Vegas with a thrilling skyline of the city, Paris, Caesars Palace and many others.

Sin City hotels, in addition to their unique appearance, also have considerable size in fact, as many as 15 hotels in Las Vegas are among the 25 largest hotels in the world </ strong > and this adds to the long list of records for the city of Nevada.

My impression about Las Vegas:

In Las Vegas I had the impression of being in a dangerously contrived city where the lights and the atmosphere that reigns on the strip make normal everything that would be strange elsewhere and for this reason it uninhibits anyone..

Have you ever been to Las Vegas?

Must see places in Las Vegas:

The Venetian is the hotel built taking inspiration from Venice

Must see places near Las Vegas: